My husband’s father flew B-29’s in the Pacific in WW II. He flew mission after mission one after the other as quickly as the military would allow him all because he wanted to get back home to his wife and the baby daughter he hadn’t met.

In later years he never talked much about the war, but when he did his five sons would hang on every word. They devoured any details they could glean on those rare occasions when their father mentioned his service.

I believe it is because of this that my husband has always been fascinated by airplanes and WWII. He got his pilot’s license as a teen and to this day continues to study, read books and watch movies about the Great War.

When we were planning our trip to France my husband’s one and only request was that we visit Normandy and see the D-Day sites.

Should you take a D Day Tour in Normandy or go on your own?

We decided to take a D Day tour in Normandy, France. Yes, you could see all the beaches and sites on your own, but we opted for an all day tour of the D Day sites and I am glad that we did. We did not select a private tour but you will find that those are available. We went on a small group tour. There were only my husband and I and two other people.

There are many tours to choose from in Normandy and I have heard good things about many of them. We selected D-Day Battle Tours with Ellwood Rene Von Siebold. I definitely would recommend D Day Battle Tours. Ellwood Rene was extremely knowledgeable, he is a war historian and even participates in re-enactments that are held locally. In addition he is passionate about imparting his knowledge.

He did a great job of appealing to those who were educated about and interested in D-Day as well as those who were not by giving us the big picture while providing those little anecdotes that make the big picture come alive. My WW II knowledge is minimal, but the tour was interesting for both my husband and I.

We did the basic all day D-Day Battle tour which included a visit to the Airborne museum as well as the church in St. Mere Eglise, Utah Beach, Pointe Du Hoc, Omaha Beach, and the American Cemetery.

As I mentioned there were only 4 of us on our tour of the battle sites in Normandy. My husband and I and two ladies from California who were not only a joy to spend the day with but also provided me with great hope and major goals for my old age. One was in her 80’s and the other was 78. They were widows and had started traveling together. On this occasion they were driving their own car all through the French countryside and they definitely clambered in and out of Ellwood’s van as easily as I did. I enjoyed every minute being with them.

The tour began in the town of St. Mere Eglise which was the epicenter for the paratroopers on D-Day and where the Airborne Museum is now located.

(My husband and I started the day with an accidental detour into another town with a church in the middle of the square that looked very similar to its more famous counterpart except that there wasn’t a tourist to be found… Just so you know, Rue Eisenhower is a popular street name in these parts so don’t trust your GPS!)

After the church and the museum and a quick lunch we visited the beaches, Pointe Du Hoc and the American Cemetery. Although I won’t discuss in great detail the places we visited I will say that each was interesting, heartbreaking and evocative. Ellwood did a great job of bringing the stories from each location to life.

We met our guide and group and began our D-Day Battle Tour at the Airborne Museum in Sainte Mere Eglise. The museum is very well done and is a great place to begin your day as it helps to give you an understanding of D-Day from the invasion preparations in England, through to the battles for liberation. It was very helpful for me to actually see some of the aircraft that were used as well as the parachutes and packs.

This church in this quiet village found itself at the epicenter of a great invasion. The mannequin of John Steele a paratrooper who found himself hanging from the steeple of the church reminds you that the outcome of a war can sometimes hang by a thread. 30 paratroopers ended up landing here and it was the very first town to be liberated.

When we visited Utah Beach I realized again how grateful I was that we had chosen to take a D-Day tour. Utah Beach without a guide would have looked simply like a beach, instead it came to life for us with the help of Ellwood and his visual aids.

The major D-Day Landings began in the early morning of June 6. Utah Beach was the nickname for this stretch of beach on which the Americans were to land. This was one of five sectors that were to be conquered by the Allied forces. Utah beach was taken with minimal casualties compared to many of the other sectors.

Pointe Du Hoc was one of the most fascinating sights of the day because you could still see the bomb craters all over the ground as well as some of the bombed out fortifications that the Germans had used. Can you imagine scaling this 100 foot rock face with gun and mortar fire all around you?

It was vital for the forces to take over Pointe Du Hoc because the German guns from here could cover both Utah Beach and Omaha Beach. The Rangers were selected for this task that many considered a suicide mission.

Omaha beach was the code name for this stretch of land that ended up being one of the most difficult and deadly sectors of D-Day. Many men were shot or drowned before they ever managed to set foot on shore. Again we were glad to be on a tour because there was very little here in the way of explanation. We simply wouldn’t have understood what we were seeing without having Ellwood with us.

The last stop on our Normandy D-Day tour was the American Cemetery and when we entered the stunning burial grounds with row after row after row of perfectly spaced crosses and stars of David…I found myself weeping. It is graceful, poignant, peaceful and sad. It is honor and horror and hope and despair all rolled up into one. It was one of the most affecting places I’ve ever visited.

In Normandy you still see American flags flying alongside the French flag. They still remember all those young men who lost their lives. They know first hand the sacrifice that gave them their freedom. They saw the cost.

There was a taste of both promise and bitterness in my heart as I walked through those crosses. The setting was serene, hopeful and hopeless all at once. I focused on remembering the courage of these young, terribly young men who kept on and kept on scrambling through waves onto beaches all while watching their brothers fall in front of them. They didn’t stop. They were determined. They were willing to sacrifice.

It takes grit to defeat evil.

They had grit. They succeeded.

I read their names and remembered.

Thank you so much for stopping by.

We also spent a lovely day in Bayeux in Normandy as well as Honfleur. Check those posts out if you are planning a trip to this part of France.

Learn more about our entire 2 week itinerary in France here. 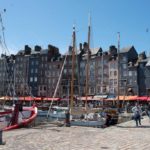 A Perfect Day in Honfleur, France 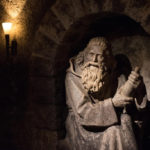 A Beginners Guide to the Wines of Burgundy