Bayeux is located in Normandy, a region of northern France. We loved our stay in Bayeux and found it to be a perfect base for exploring the Normandy area. Bayeux is a wonderful town with great restaurants and has many wonderful things to do in Bayeux along with easy access to other many Normandy attractions.

When we drove into Bayeux around 10:00PM after a difficult start to our vacation (travel day woes) the late setting summer sun was shimmering orange on the spires of the cathedral. To my jet-lagged and travel sore eyes it looked like a sign, a dazzling promise, a harbinger of beautiful days to come.

We found Bayeux to be the perfect city from which to explore the Normandy region of France. We were close to all the D Day Beaches and museums, we were near the lovely coastal city of Honfleur, we were able to drive to a multitude of lovely sights and easily explore this unique apple growing, cider making, dairy loving region of France.

TIP: I do believe that you need a car to really navigate and appreciate all the attractions in Normandy.

In addition to its proximity to all the important sights in the region, Bayeux is a calm and peaceful city to come home to at the end of a long day of sightseeing.

Things to do in Bayeux France and the surrounding areas

Enjoy the ambience of the town of Bayeux!

Even though there are plenty of things to see in Bayeux, one of the best things about basing your stay here is the town itself! It is pleasant just to soak up the atmosphere and the beauty.

Bayeux feels like peace and security, like ancient money, like an old man’s memories of youthful vigor. Bayeux is calming shades of weathered beige, faded mustard, and silver gray with occasional pale pastel shutters on the windows. It is dignified stone buildings, half timbered houses, and empty cobblestoned streets. It is an imposing and dramatic cathedral that speaks of past power. Even the river that meanders through the town is staid, respectable and contained, as if it wouldn’t think of running too fast or overflowing it’s banks.

You can spend an afternoon just walking and popping into various shops and walking through lovely parks. Bayeux is a small town. It doesn’t take long to walk its streets, but it seems to be perfectly designed for strolling and contemplation. It was almost miraculously left undamaged during WWII so its essence and heart remain unchanged, making it a place where you feel you can touch the past while fully enjoying the present.

In short, Bayeux is a lovely place to walk and wander and think and ponder.

Our first morning in Bayeux was Saturday, the day of the local market. Our bed and breakfast hosts mentioned that the market was just around the corner and recommended that we go. If you are in a foreign city on their local market day…go…always go.

The air was cool and shimmering and conversation swarmed around us, words we couldn’t understand. Were we the only tourists? We felt that we were. We strolled slowly in our own blissful bubble. Piles of vegetables somehow seemed brighter than at home, radiating greener greens and redder reds. Hugh wheels of cheese were piled high, threatening to topple. Bins of olives beckoned. Piles of snails, crabs and other crustaceans on ice along with ugly fish that we didn’t recognize demanded to be examined.

An old man with few teeth and even less English gestured to us to visit his stand. He was selling Calvados. We managed to communicate as we sipped samples of his apple liqueur that crimped our tongues and burned our throats. We bought a bottle. My husband wondered if this had been a “pity purchase.” “He was so nice!” I replied. Pity was not the emotion I experienced while tasting his terrible calvados, it was something more akin to joy. Delight in a moment. That bottle still sits unopened in our pantry and I smile every time I see it.

We passed artichokes and gorgeous green and white asparagus and the reddest, tiniest, most glorious strawberries I’ve ever seen.

The line at the Paella stand was long, all locals. We had just finished our late breakfast and didn’t have any. I regret that. I look at my photos of that paella and examine my memory of the smell and I yearn to have tasted it! Lesson learned. Don’t pass up a taste of anything delicious while traveling…or in life.

You must visit the cathedral that dominates the town. Officially, in French, it is the Cathedral Notre-Dame de Bayeux, the Cathedral of our Lady of Bayeux. It was consecrated on 14th July 1077, by Bishop Odo of Conteville, in the presence of his illustrious brother, William the Conqueror, duke of Normandy and king of England. Like most of these ancient cathedrals it has changed over the years, it was repaired in a gothic style after being damaged by fire in the 12th century.

You might be surprised to discover that the interior of the cathedral feels airy and bright, Many of the windows are clear allowing much more sun to stream in than in many other buildings of the sort. It makes the interior feel lustrous and light, as if parts of it are floating.

The town is almost silent in the evenings. You can walk and imagine that you are back in the past. Best of all the exterior of the cathedral is a sight to behold when it is lit up in the evenings.

Along with the cathedral the Bayeux Tapestry is probably the main attraction in Bayeux. In fact, it was originally created be displayed in the grand cathedral. Now it is protected in a museum, behind glass, with special lights to keep it from fading. It is something so exceptional and so unusual that the word treasure doesn’t do it justice, but that is all I can think to call it, the Bayeux tapestry is a treasure.

Entrance to the museum comes with headphones that explain each part of the tapestry as you slowly move along its 230(ish) feet of length. It is less than 2 feet high including borders on the top and bottom that show all the bit players to the story. The “tapestry” is really embroidery on cloth, stunning work, that tells the entire story of William the Conquerer at the Battle of Hastings. I’m not going to pretend to have remembered much about this part of French and British history before I visited the tapestry, but we still found it fascinating.

I kept thinking about the hands that made the tapestry. Women’s hands. Historians argue about who might have done the work. Was it Saxon nuns from noble houses, or professional female embroiderers? Nobody disputes that it was created by women and nobody disputes their talent. Gifted women, long forgotten, who were most likely commissioned by Bishop Odo of Bayeux to design scenes of war and conquest and beauty. The borders show farmers, hunters, bakers, depictions of Aesop’s fables, various animals and birds, as well as soldiers dying and wounded.

Life and stories and death.

Try a Galette and a Cider

Normandy is known for galettes and cider. It is too far north for grapes to grow but there are lots of apple orchards in the region and they create a variety of ciders that are better than any that I had ever tried before. A galette is a type of crepe made from buckwheat flour which usually has a savory filling. Many of the Bayeux restaurants have both on the menu!

Have a Pastry at La Reine Mathilde

I have mentioned the Hotel Reine Mathilde as one of the best places to stay in Bayeux, but even if you don’t stay there you must stop by their pastry shop. It is charming both inside and out and they have the most delectable selection of pastries. Definitely try one of their macaroons! You can come here for breakfast, but I really enjoyed it for afternoon tea.

The Musee d’Art d’Histoire Baron Gerard is a museum in a palace just next to the cathedral in Bayeux. It has been called one of the best small museums in France. its collections cover a lot of time, from prehistory to the 20th century, however it is manageable because it all of that history is set against the background of the town of Bayeux.

Memorial Museum of the Battle of Normandy

This museum tells the story of the liberation of Normandy. and all of the various battles that took place from June 7 to August 29, 1944. The history is told through photos, personal accounts, and a large collection of military uniforms, as well as equipment and vehicles used by both the Allies and Germans during the Battle of Normandy. There is also a short film that is offered in both French and English. This is a very well done museum.

I highly recommend taking a tour of the D Day sites. We found our tour to be both meaningful and informative. We felt that a tour enabled us to get the big picture of the way that D Day changed the course of the war as well as gave us some of the small, but important details that we wouldn’t have learned otherwise . Of course you can choose to go to the D Day sites on your own and if you do you will find that Bayeux is perfectly located to see the beaches and the museums.

I won’t mention all the D Day sites here, but you can read more about them in my post about our D Day tour. If you choose to go on your own you will definitely want to visit some of the following sites:

We saw all of the above on our D Day Battle Tour.

Our day in Honfleur was one of my favorite of our entire two week time in France. I would highly recommend taking the short drive from Bayeux to Honfleur. This town was a favorite of the Impressionist painters and upon arrival you will realize why.

Honfleur sparkles and shines and is full of life and color.

Another haunt of the impressionists, Etretat is a small resort town with amazing scenery. You are coming here to see what nature has accomplished. The white chalk cliffs tower high over the ocean which has carved three arches into the mountainside. You can walk the coastal paths at the top for stunning views.

As I mentioned above Normandy does not grow grapes. There are no wineries here, but they have apple orchards aplenty! The cider route is a 40km loop drive which will take you through lovely little villages with cider houses and mills. The route is clearly marked with signs that say “Route du Cidre” and have a picture of an apple. There will be stops along the way where you can see how cider is made, learn about it, taste it, and buy it.

Normandy is one of the most picturesque areas of France and Bayeux is the perfect base from which to explore it! Hope you enjoy all the Bayeux attractions as much as we did!

Learn more about our entire 2 week itinerary in France.

Thanks for stopping by and we love it when you pin! 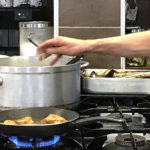 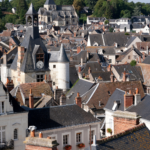