You will read many tips about using credit card points or flight miles for flying for free or inexpensively. But what about for those people who don’t want to get multiple credit cards? Here are a flight attendants tips for finding cheap flights without using points!

It does take a little more work to find flight deals when you can’t just hand over points. You are always going to want to be watching the trends and keeping up with the deals but I promise that it will be worth it! Also remember that some of these tips are “generally” true, not ALWAYS true.

What is Dynamic Pricing

One of the important things to know about airlines is that they practice what is called dynamic pricing. In other words the prices change all the time! Even daily!

The reason for this is that they are in business to make money. They know when the demand for flights is highest and will charge more during those times. Want to go to Hawaii in December or Paris in spring? You are going to pay more. When fewer people are flying they drop the prices to attract more passengers.

One of the keys to finding cheap flights is to fly when the demand is lower. This means that…

The Best Way to Get Flight Deals is to Be Flexible!

I’m not talking about working on your yoga skills here either! Haha.

Flexibility is really the key. When you have to travel on certain dates you automatically limit your chances to get a less expensive flight. If you have to go home to Florida in January over the weekend you are going to be traveling with lots of other people who want to spend a warm weekend in Florida and the prices are going to be higher.

You don’t just want to go to only one search engine and call it good.

You might be surprised to know that the various flight search engines might show you different airlines and different routes and come up with different prices. Be prepared to check several of them!

Some of my favorite search engines are:

And of course there are the OG’s of Kayak, Expedia, and Priceline, but I like some of the newer ones better.

NOTE: Once you find a deal on an airfare search engine check it on the airline website as well!

Be Aware of the Typical Flight Prices

How do you know you are getting a deal if you don’t know what the prices are normally?

It is a good idea to keep a list of your top ten places that you might want to visit and check the search engines regularly to see what might be an average or normal price for your route. That way when something cheaper pops up you know to book it right away!

Keep an Eye Out For Special Deals

This is probably my favorite tip of the bunch! I love looking for those extra special deals. A couple of years ago we snagged a round trip flight from Little Rock to Paris for only $320 through one of these deals. Here are my favorite places to look for special flight deals.

Many of the sites mentioned in the two tips above allow you to sign up for flight deal alerts for your preferred routes. This is a MUST for everyone, but especially for those who don’t have time to search flights on a regular basis.

Be Aware That Not ALL of the Airlines are on the Airfare Search Engines!

Southwest Airlines is a major airline that is NOT on the search engines. You will have to go to their website to check their fares. They often have good deals so definitely take the time to do this.

Many of the budget airlines also don’t show up on the search engines so you will DEFINITELY want to check the prices straight from their websites. They will often have better deals than the major airlines offer.

Follow the Airlines and Deal Websites on Social Media

Watch For Prices not Destinations

This tip goes back to being flexible! Yes, there are times when you will simply have to go to a specific place. However, if you are just wanting to go somewhere warm or anywhere in Europe watching for prices instead of destinations opens up a whole world of potential deals!

Know the Cheapest Day to SHOP for Airfare

Often, the cheapest day to shop for airfare is Tuesday. The reason for this is that many airlines release their sales on Tuesdays. That doesn’t mean that you shouldn’t be checking prices on other days but definitely make sure that you check on Tuesdays.

Know the Cheapest Days to FLY

The cheapest days to fly are usually Tuesday, Wednesday, and Saturday. Keep this in mind as you are planning your trip.

Know the Cheapest TIME of day to Fly

The cheapest time of day to fly is when other people don’t want to fly. Most of the time this is early, early in the morning or late, late in the evening.

Don’t Buy Your Tickets Too Early or Too Late

Obviously this is just a general guideline. You will always want to be checking for those special deals and purchase them immediately no matter what the timing is!

NOTE: If you must fly during one of the most popular times (particularly holidays) you are usually going to save money by buying your tickets a little on the early side. You will rarely find deals during these high travel times.

Shop for Airfare in Incognito Mode

I know, I know, many travel experts will tell you that this doesn’t matter. I just think that if my phone listens to me and shows me ads about things that I’m talking about…the airlines probably know when you are searching for tickets. Hah!

It probably won’t matter when you search the first time, but if you are going continuously be checking a specific flight often it certainly wouldn’t hurt to search in incognito mode.

Did you know that many airlines offer discounts to students? Unfortunately I didn’t learn about this until it was too late for me to take advantage of these deals.

Here are the two best places to look for student discounts:

The various airlines have different rules about their student discounts but these sites will help get you started.

Note: You will not want to assume that a deal you find under student discounts is the best. You will definitely want to compare by checking other places.

If You are Traveling With A Group – Search For Tickets Individually

The reason for this is that airlines will also show the most expensive ticket price and apply it to the entire group. Let’s say you are going on a girls trip with you and three friends. If the airline has two tickets left at the cheapest price of $250 and the next two are at $350 you will be shown the price of $350 each for the four tickets.

Listen y’all, great travel deals don’t last long. There is a lot of competition for the very best deals and they will go quickly. If you find something that you want and that you know is a good rate you will want to purchase it right away.

Thanks for stopping by! 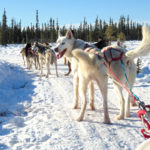 Best Things to do in Fairbanks in Winter

What to Wear in Texas: Packing Tips For a Texas Vacation

How to Avoid Getting Airsick: Secrets From a Flight Attendant