Going to Cuba was a spur of the moment decision. One evening my husband was watching a television show about the classic cars in Cuba. He turned to me and said, “I want to go to Cuba.” My response was, “OK, let’s go!”

Truthfully, I don’t remember exactly how I responsed. I just know that when anyone suggests a trip anywhere my answer is always some version of, “OK, let’s go.”

I DO remember saying, “let’s go before it changes.”

I had heard that things had opened up a bit for Americans to visit Cuba, but had no idea what the laws really were. Basically, I knew absolutely nothing. However, I am a researcher and planner…so it was off to sit in front of the computer with dozens of open tabs and pen and paper by my side.

Realization quickly dawned that although we could probably go to Cuba as an independent travelers from the US it would be much simpler to go with a tour group. Less than 24 hours from the beginning glimmer of the idea to visit Cuba I found myself booking a culinary tour with Access Trips. Best quick decision ever!

And that was it. I immediately stopped learning and researching. Although it was completely out of character, I subconsciously decided to relax and let someone else do all the planning.

Perhaps this is why Cuba caught me by surprise. Perhaps it was because I hadn’t over-prepared in my usual way.

All I know is that we pulled away from the crush of the airport in a 1957 Chevy onto the streets of Havana and drove into a country that was very different from the one that I had imagined.

People say that a visit to Cuba is like going back in time and, yes, there is definitely an element of that. But there is also an incredible sense of the present. Cuba made me feel acutely aware of every moment, every second, and every experience just as it was happening.

I would describe my visit to Cuba less as an encounter with the past, and more as an encounter with timelessness. In all the places that I’ve traveled I have never before experienced anything similar to the way Cuba felt. It was a dreamy state of pure presence all tangled up with nostalgia.

It was like living in a brilliant, tactile memory.

Was it the old cars, the lack of cell phone usage, the crumbling beauty, the children playing in the streets, the warmth, the attitudes?

Perhaps I romanticized our visit? I tried not to. I was aware at all times of the problems and daily difficulties that the people of Cuba encounter. To the credit of Access culinary trips and our guide I never felt that the very real hardships of the Cuban people were being whitewashed or ignored away.

Obviously, we know the troubles between our governments. In addition to general knowledge, my husband and I lived for years in South Florida and have many Cuban American friends. We have heard their stories, we know what they left behind, we’ve listened as they’ve described their fear and their loss. When speaking with locals on our trip we sensed the desire that many have to be with family members in the US, their yearning for a chance at a different life.

You can’t idealize a country when you know that it is torn and damaged and that its people struggle to get basic necessities.

But…still…there is something special, something imperishable, about Cuba. It is extraordinarily enduring. You feel it in the faded opulence of Havana. You see it in the various colors of peeling paint revealing years of attempts to cover crumbling buildings. You hear it in the beat of the music and you taste it in the harsh sweetness of the rum.

Most of all you sense a quality of steadfast abiding in the people. They keep their old cars running by sheer grit and creativity. They are resilient. Innovative. Determined. They’ve had to be! They’ve watched friends and family leave their island by the hundreds of thousands and they have lived together through the “special period” of the 90’s when each day they faced not having enough to eat.

Cubans know how to work the system. They know how and when to bend the rules and when to stay on the straight and narrow. They live their lives with a constant push and pull of independence and conformity, of flourishing and deprivation. They are savvy and cunning but still endearing.

And, of course, there is that feeling of timelessness that I mentioned. As if the country didn’t belong to any known time. As if the concept of time is somehow less relevant there than in other places.

One of the most notable differences was the lack of rush and angst and hurry, hurry, look at the clock. There was never a feeling of, “I need to do this right now, I need to be there in two minutes, I don’t have enough hours in a day!” It made me realize how much of my life is about future worries, past regrets, what needs to be done, thinking of everything except for this…moment.

Perhaps time is a nebulous thing in Cuba because the people know how to wait. Patience is more than a virtue, it is a necessary part of everyday existence.

The Cuban people must wait in line for meat, for bread, for necessities. They wait to be able to get better housing, they wait for permission to leave their country and see another part of the world, they wait for a ride to the other side of the island, they wait on slow internet service, they wait to see relatives long lost to Miami.

Most of all they wait for change.

Our tour guide told us Cuba does change, but slowly, like a turtle. I would describe it more like a dance, 2 steps forward and a large step back. You might eventually make it to the other side of the ballroom but it’s going to take the whole long song.

The Cuban people are accepting of their lot without being resigned. It is acceptance of the moment, but with expectation for tomorrow…whenever tomorrow might come. We were told by a local that, “we believe that life will get better, maybe not for us, but for our children…maybe for our grandchildren.”

I saw lives lived well, joy in the ordinary, gratitude for incremental progress, and confidence in better days to come. Patient hopefulness would be an apt description, like an immortal princess spinning in a tower, believing that something good is on its way, unconcerned with the passing of time.

Maybe the sense of timelessness that I felt almost immediately upon my arrival in this fascinating country is because of the people and their ability to wait with faith.

And there I was arriving with my point of view and thoughts and pre-conceived ideas. That part is probably unavoidable for any human being. As much as we try to stay open it is hard to not look through the lens of what we know.

What was avoidable was this notion I had of seeing a place before it changed, before it was “spoiled” by progress.

The extent of my selfish thoughts fully hit me as we prepared to depart Cuba. I sat in my window seat with the plane idling on the tarmac at the airport just before take-off to Miami. I noticed heavily armed guards on either side of the runway watching the plane. They were there to prevent the desperate from trying to climb into the wheel wells in an attempt to escape. In an attempt to have a different life. In an attempt to have the options, the progress, that I take for granted.

“Let’s go before it changes,” I said. Those words came back to trouble me.

For the average Cuban change would mean being able to own a vehicle that wasn’t held together with baling wire. It would mean experiencing the joy of walking into a fully stocked grocery store and being able to buy the perfect ingredient to make your dinner that night, it would mean having the ability to travel freely in the world.

I learned so much in 8 short days about Cuba and its people and about myself. I felt so much. I saw the world and time in a different light.

I left wanting to do better, to think more clearly, to see life through other eyes. I left clinging to awareness, determined to live more in the present moments of my life, yearning to be more patient and to carry with me the belief that good things are coming.

Mostly, I left with a deeper concern for Cuba and its enduring people.

For more information about our trip to Cuba check out the following posts:

The Classic Cars of Cuba

Thanks for stopping by, 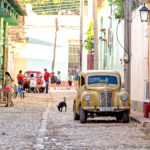 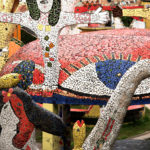 A Visit To the Amazing Art Installation of Fusterlandia